Any high-altitude biome
Hippogryphs are mysterious alpine flying carnivores that can be tamed and ridden.

Hippogryphs are creatures with the body, tail, and back legs of a horse, the head and wings of an eagle, and eagle's talons as its front feet. They come in 10 different colors, most of which are based on the color patterns of different real-life birds (and are mentioned below, as well as showcased in the gallery).

The colors of the hippogryph and the biomes in which each color can be found include the following:

Hippogryphs are generally neutral, and will usually not attack players unless provoked. However, true to their predatory nature, they will target and attack players once hungry; as well as this, they will attack farm animals and other passive mobs. When attacking, hippogryphs will usually take a bite out of their prey with their hooked beak, dealing 2.5 hearts (5 HP) of damage with each bite; however, they are also known to rear up to deliver a deadly kick with their powerful talons, inflicting heavy knockback upon their quarry.

Unlike most other mobs in the mod, hippogryphs will slowly regenerate health.

Hippogryphs can be tamed with rabbit feet. To tame a hippogryph, all one has to do is drop 3-7 rabbit feet near it, and it will eat the treats and begin to tame by itself; however, if a hippogryph is found flying in the air, it is recommended to practice patience and keep track of the hippogryph until it lands. Once the beast is tamed, it will sit down. Domesticated hippogryphs can be saddled, carry chests, and be equipped with armor. Along with this, they can be made to wander or sit by interacting with them while holding a stick; however, note that when ordered to roam, they can still fly at will. Fortunately, however, a dragon bone flute can be used to order any hippogryph to land. In addition to this, domesticated hippogryphs attack mobs and players who attack their owner, and any domesticated hippogryph that is flying midair and not sitting will drop to the ground and start attacking the mob or the hostile player.

Two hippogryphs can be bred by feeding them rabbit stew. They are bred in the same manner as other vanilla animals; in this case, right-clicking each hippogryph with the rabbit stew will cause them to breed. Breeding the two hippogryphs will produce an egg.

Note: The hippogryph has to be wandering(Right-click with a stick) to be able to breed

A hippogryph's inventory can be accessed via interacting with them while sneaking. A player can equip a chest which gives the hippogryph inventory storage, a saddle that makes it rideable, and finally, Hippogryph Armor that absorbs damage from most attacks.

A Hippogryoh in armor and saddle 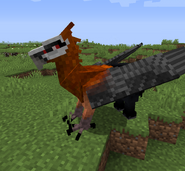 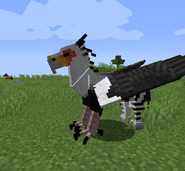 Frosty Hippogryph
Add a photo to this gallery

Retrieved from "https://ice-and-fire-mod.fandom.com/wiki/Hippogryph?oldid=28888"
Community content is available under CC-BY-SA unless otherwise noted.